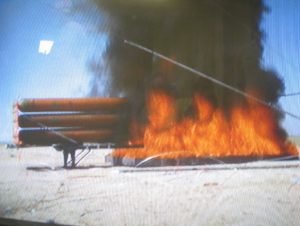 A new ruling saying pressure relief devices (PRDs) are no longer compulsory on hydrogen tube trailers with cylinders longer than 12 feet is being hailed as greatly improving the safe transportation of the gas in the US and Canada.

The Pipeline and Hazardous Materials Safety Administration (PHMSA) within the Department of Transportation (DOT) has made the use of PRDs optional on hydrogen trailers following over two decades of lobbying spearheaded by the Compressed Gas Association (CGA) working with FIBA Technologies and gas majors including BOC, Air Products and Air Liquide.

Bill O’Brien, Vice Plant Operations-Service Div. at FIBA, sees the new ruling as the conclusion of a project that included a series of bonfire tests conducted in the Mojave Desert in 2006.  A bonfire was lit beneath a charged tube trailer to demonstrate that the venting of gases from a trailer would be safer without a PRD than with.

“The CGA and its members demonstrated that PRDs slowed down the release of dangerous gas in an emergency – we proved this with a series of bonfire tests using a fully-charged six-tube hydrogen trailer,” says Bill O’Brien.  “Three tubes had the PRD fitted and three did not.  The ones without PRDs allowed a faster and  more controlled release of the gas.  The PRD limited the venting of gas too much.  One even created a 40’ flame shooting out from the vessel.”

This move follows the tried and tested European guidelines which have allowed non-PRD transportation of various gases for some time.

“For the customer this means improved safety,” comments Bill O’Brien.  “PRDs are designed to prevent a charged cylinder rupturing during a fire. But they can also open accidentally and release the gas, creating a risk to the public.  We showed that a vessel without a PRD is safer than one with.  Making PRDs optional is the ideal outcome.”